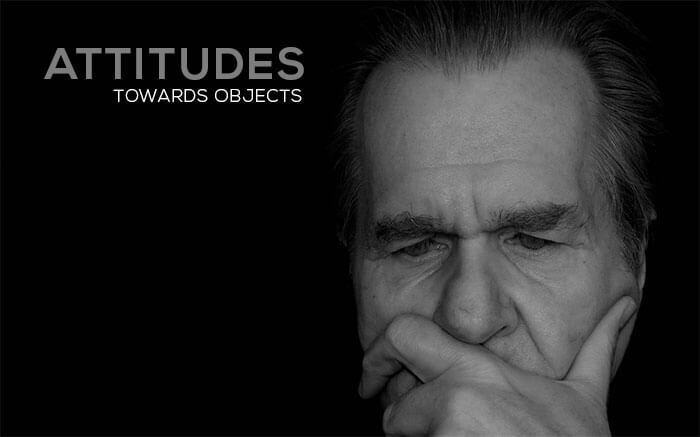 Attitude Towards the Object | Consumer Psychology

Free website auditDon't have a website yet?
Brand positioning: How to position eco-friendly brands - Conquer the market
Building a brand | Strong Brand Creates Customer Loyalty
Consumer Decision Process Model | Consumer Psychology
How to Determine Brand’s Values | Building a Brand
How to drive traffic from Amazon to your website?
How to Utilise Packaging User Experience to Increase Profits
What is a Strong Brand? | Newbie Introduction to Branding
When is building a brand community a good strategy
Why Schools need Strong Branding and Graphic Design

Attitude Towards the Object  - Understanding them and how they effect us.

Attitudes are a major part of our lives and are hugely important to understanding our own psychology. Perception is what we use to see, hear and feel in order to recognize and understand ‘things’. That is how we navigate through the world.  . and ‘things’. Leo Gura said, “All human behavior is ultimately rooted in survival”. So, in every person there is a bias which is natural to humans as our ego is conditioned to survive and above that, to thrive in its environments. Every person has an attitude towards the object. Or a bias towards ‘something’ whether it be the bread they eat, the cars they drive or the lifestyle they live etc... Attitudes are beliefs, they are bias, and we believe they change on the spot dependent on environments and contexts.

Different Models of the Attitude Theory

It is important to note that often there are many models for the same issue/topic and scholars often argue which ones are ‘true’. Attitude towards the object are dependent on contexts and situations. They are never one dimensional and there are always contexts that we will miss. For this reason, there is no one way of looking at them and following a model. However, it is also a good idea to keep in mind that the case with models is that they should be used as guides rather than strict facts.

Attitude as objective-evaluationassociations represent an important core of the MODE Model which is afundamental model used in measuring implicit attitudes (Fazio, 1990). “the MODEModel argues that attitudes are represented in memory as object-evaluationassociations, which may vary in terms of their strength. If these associationsare sufficiently strong, evaluations may be activated automatically upon theencounter on an object- relevant stimulus.” Gawornski (2007, p. 575). Thismodel finds attitudes to be stable throughout time and not changing to contextor environments depending on their strengths.

The Tricomponent Attitude model Schiffman, L et al. (2013) is also focused on previous instances of consumer interaction with an object. It is divided into three different parts that being cognitive, affective and conative. This model presents that attitude towards the object are brought back to us by a stimulus of one of the three parts and further constructed based on the other two. For example, a user may elicit positive attitudes towards a brand, and this attitude will be reinforced by their rationality and action. Usually this model represents explicit attitudes.

The ELM model (Elaborationlikelihood model) is a dual process theory and it is about the change ofattitudes. It has two components of persuasion which are central and peripheralcomponents. The central component assumes that when given a chance once encounteringa stimulus, we will think through our attitude and react accordingly. Theperipheral component is used when we are encountering a stimulus but have nomajor interest in an object and the attitude is more based on the feelings as away for the brain to make shortcuts.

Attitudes formed on the spot or stable throughout time?

Eagly and Chaiken also regard attitudes as relatively stable throughout time. Shwarz questions that and asks whether attitudes change within context and situations right on the spot (Schwarz & Bohner, 2001.). We believe that we are much more prone to create attitudes right on the spot dependent on contexts and environments. We agree that being exposed to previous objects could have already formed an attitude and these attitudes can be brought up when the relevant stimulus is activated. However,  we also believe that the environment and context has much more to say than our memory. We believe that we as people do not have as much control over our brain to decide what attitudes we have and what feelings we have towards objects.

Research was conducted by Meyers-Levy et al. (2010) and it showed that the environment had a larger impact on our attitudes. So, the vaguer something is (or in this study – the further away it is), the environment will have a higher impact on our attitude towards the object. One of the objects in this experiment was a vase. This test was conducted by having participants stand on a soft carpet and another group on hard tiles.

This backs up that attitude is dependent on the context of the environment , This is especially true when we perceive things vaguely or with an uncertainty. However, as discussed in the introduction to models, we do not know the full context of the research. So, it is possible for any other factors to influence these attitudes towards the objects especially considering that the strength of the attitude towards the object from previous memory can play a part in this.

This research backs up our argument, and furthermore, there are even more different factors that could affect attitudes like; considering strength of attitudes towards an object from previous encounters, room temperature, motor perceptions, colours, or even reference groups. However, this also proves some rightfulness to the ELM model particularly with the peripheral rout where if “something” is less interesting to someone, it is more likely to form an attitude based on the feelings within the environment.

Corey Wane said “whatever the answer is; you want it to be positive. Positive topics elicit positive feelings. This creates attraction” (p. 163). This quote while simple, it also justifies my belief even though it is referenced from a self-help book. It shows how no matter what the situation (or environment in this case) is, if the answer is positive, it will influence the attitude towards the object in a more positive manner.

A personal experience towards Attitude Towards the Object and perception forming

A personal example of a situation I had, on May 16th 2019, shows how my brain functioned in that situation and I believe it proves why attitude towards the object are made on the spot. I went out on a walk, and on the way through a colourful graffiti tunnel, I encountered a camera crew blowing bubbles and filming it. My thought was that they are filming a psychotic sequence.

When I got out of the tunnel, there was a company vehicle parked saying “company name LTD”, however, since I was exposed to my thought about the psychedelic trans movie recording, my brain subconsciously read “company name LSD”.

While this is a linguistic example and shows more of how our brain works, this somewhat reminds me of the MODE Model where my brain automatically saw “LSD” because of the relevant stimulus, however, this does not have a long-term effect. In this case my attitude towards the object was formed right there and on the spot.

While we find the MODE Model to be logical, We do not agree with its entirety. We believe that attitudes and their stimuli have a higher impact on us when we are passive and when we are able to experience everything around us.

How being Passive and Unconscious Effects Attitude and Behaviour

When we are passive we tend to let our brain wonder off and relax. Being less rational and unaware of the situation, we are more prone to feel emotions and the environment. This acts somewhat like meditation but our brain is still processing everything, even though we are not conscious of it. Therefore, we soak up all the emotions and feelings and apply them towards ‘things’ and thus form attitude towards the object.

In our personal example above, when walking down the tunnel, I was very relaxed and passive. I was walking by and listening to music, not making much of the situation. And so, what my brain was thinking (“LSD”) was influenced by the environment right there and then. This situation proves how my brain reacted in that situation and even though it is not a direct example to attitudes, I believe it transitions well.

We also believe attitude towards the object are formed on the spot because it is simply easier that way especially in social environments. It is really common for people to change their behavior and attitudes towards things when in a social circle that has different attitudes themselves. This happens unconsciously or consciously, but fact remains that attitude changes on the spot.

Consumer Attitude Towards the Object and Behaviour - Conclusion

As humans, we or rather our ego likes to think we have the control over what we think and what we want to think, however, that is misleading. The ego gives itself too much credit for the amount of control it has over the brain (Gura, L. 2019.). In reality, our brain is complex. We think a simple and innocent example such as the “LSD” linguistic example illustrates it well - it is easy to trick your brain. Therefore we believe that while memory plays some part in attitude towards the object, we think the ego gives itself too much credit for remembering and hides the fact that we are inconsistent with our belief and that it is so easy to influence it. We know that attitude towards the object are formed on the spot.

Sources and Theory about Attitudes and Perception

Gura, L. (2019, May 26). Understanding Survival - Part 1 - The Metaphysics Of Being Human [Video file]. Retrieved from https://www.youtube.com/watch?v=i8NNtpzYQx8